Client red flags: 8 types of clients to avoid on Upwork, in freelancing 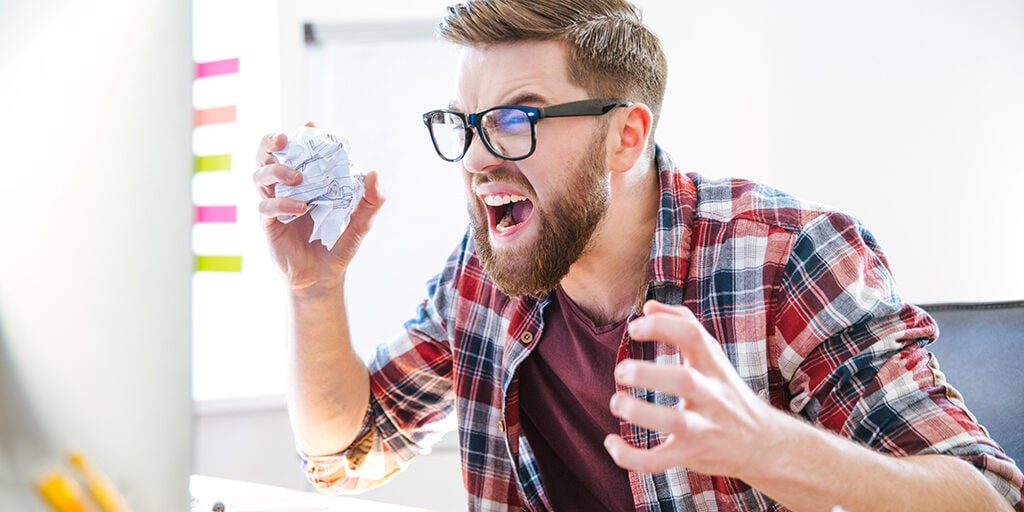 
Disclosure: This site is sponsored by affiliate programs. We may earn money from the companies mentioned in this post. As an Amazon affiliate partner we may earn from qualifying purchases.

I had to do something I absolutely hate doing. I broke up with a client.

It doesn’t happen very often. In fact, it’s been YEARS since I last felt the need to cut the cord and end an engagement early.

I don’t even blame the client. I blame myself for ignoring the red flags.

Luckily I was able to back out gracefully before any real work began, but with that said, it’s still an inconvenience for all parties involved and something that should be avoided at all costs.

But the good news is, for the most part, 98% of bad engagements are completely avoidable – IF you pay attention to the following red flags (ranked by severity, lowest to highest).

(Editor’s note: At the end of the day you have to use your own judgement and your own instincts when taking on a new client. The following are based off of poor interactions/close calls I’ve had in the past, and have since learned to avoid.)

Jumpstart your freelance career with this handy dandy guide

Subscribe to my newsletter and I will send a starter kit that features my best Upwork tips and a 28-day Upwork challenge to your inbox.

In the client’s defense, when they tell you how long they THINK a project will take right out of the gate, there’s a possibility they have enough experience on the subject matter to safely make that kind of assumption.

But when a client tells you how long a project “should” take and then proceeds to push back or acts offended by your actual estimate, it’s cause for concern.

Good design takes time. If your client doesn’t trust that you are providing a fair and accurate quote to the best of your ability, it indicates a lack of respect – which never leads to a successful outcome. 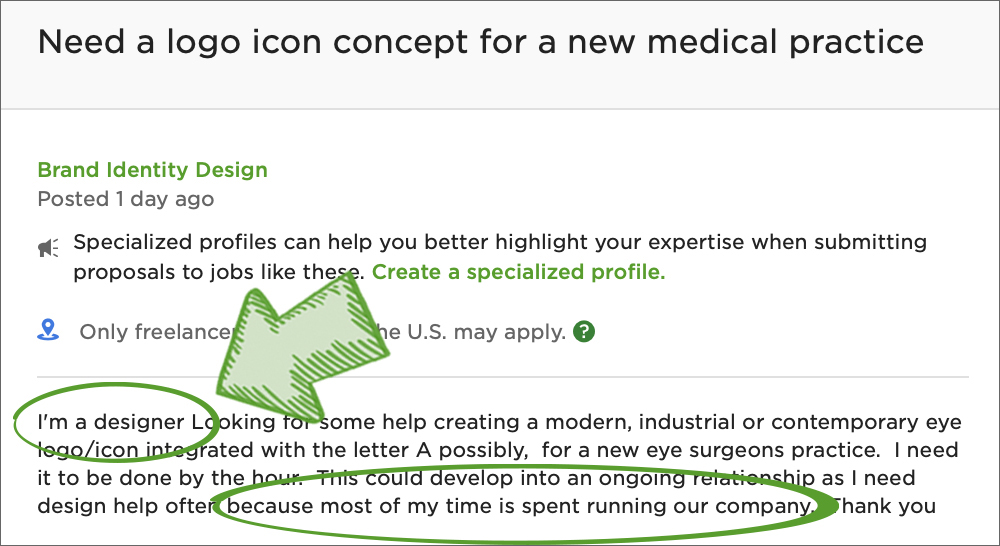 I want to start out by saying that there is no harm in subcontracting for another professional graphic designer or firm.

The problem here lies when your client THINKS they are a graphic designer because they kinda know how to poke around in Photoshop a bit and seem determined to take your project way off the rails.

For example, one of my very first Upwork gigs was for a guy who claimed to be a graphic designer who wanted a newspaper ad for his business but claimed he was “too busy” to tackle the project.

I sent over a first draft, and he immediately asked for source files (asking for source files before you’ve been paid is also red flag in its own right, but we will get to that a bit later).

I sent over the PSD, and about an hour later, he sent it back to me saying he had made his own edits and wanted me to “finish it up”.

And let me tell ya, it was alllll kinds of funky. Layers were merged, photographs were distorted and the text was flattened. Of course, I was expected to fix it.

We went back and forth like this for several hours that day until it was time to request payment, and he refused to pay the originally agreed upon amount citing the fact that he had to “do half the work” himself.

I never received full payment for the project, but I reported him to Upwork. I don’t know what happened after that, but I’ll tell ya one thing – I don’t plan on working with anymore “wanna be” graphic designers any time soon. 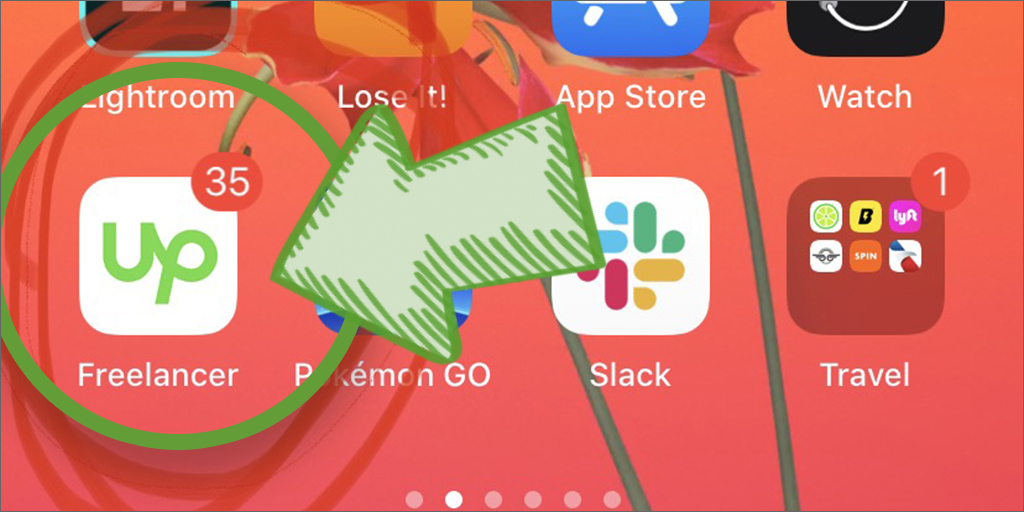 6. Excessive communication before the project begins

This one requires a bit of a disclaimer. I am a BIG believer in communication. In fact, a new client inquiry should be a bit like a first date. The “getting to know you” period is incredibly important.

But when communication becomes excessive, and an actual assignment doesn’t soon follow, it may be time to abandon ship.

This is actually what happened with the client I let go this week.

This particular client said they were a marketing company and were looking to hire 3 graphic designers for a steady stream of projects for their clientele.

I participated in multiple rounds of interviews, lengthy “training sessions”, exchanged several emails back and forth, installed required software on my computer, formatted my invoices to fit their standards, etc.

And yet, more than 4 months after our initial engagement, they had yet to give me a single assignment.

I want to be clear, it isn’t at all unusual for a lot of time to pass between initial client inquiry and project commencement, but the issue here is the amount of unbillable time I was being asked to invest in something that clearly wasn’t paying off.

I also couldn’t help but wonder – if they are dragging their heels this much when it comes to assigning work, how are they going to be about actually paying me?

Always be sure that you are placing a value on your time. If you find yourself spending hours doing backflips for a client that seems more interested in talking about a project than giving you actual work, freelancer beware.

(Side tangent – I seem to encounter this issue a LOT with “marketing companies”. I’m not sure there’s a direct correlation, but I may need to add “Client says they are a marketing company” to a future list of red flags.)

5. Your client says “This is a RUSH JOB”

Look, rush jobs happen, it’s part of life. Sometimes a client might even be willing to pay a higher rate to push his or her project to the top of the pile, but I refuse to take on rush jobs with a brand new client.

Healthy relationships with clients that you trust and who trust you back are without question one of the most important aspects of freelancing. It takes time to build that kind of trust.

It’s never smart to begin a new relationship in a pressure-fueled situation. Rush jobs with new clients inflict undue stress on all parties involved and rarely lead to a positive outcome. 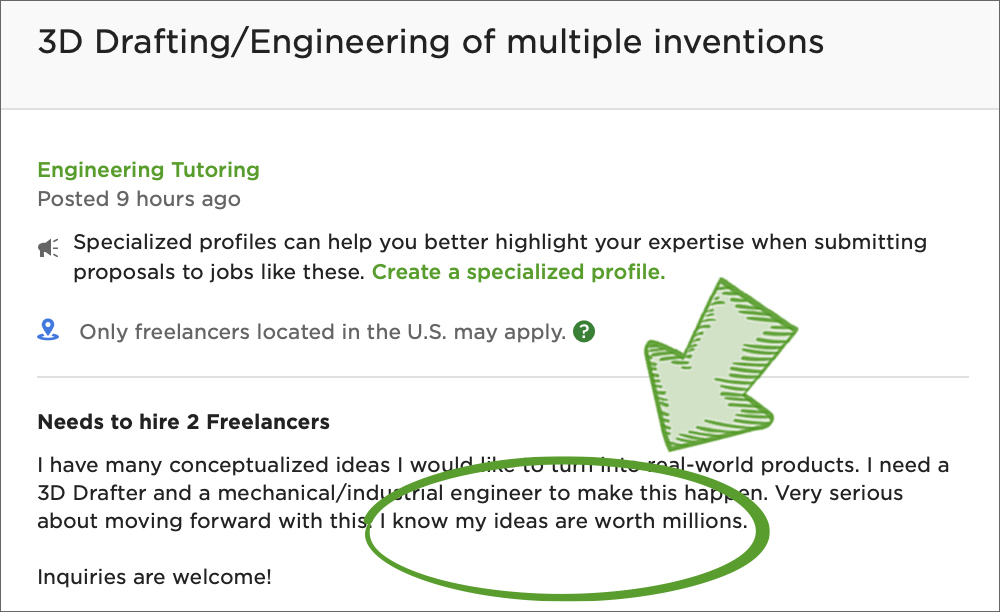 4. The client says “This is a multi-million dollar idea – this could be a great opportunity for you!”

I feel like this doesn’t even need to be said – but it’s either a sign that your client is naively ambitious (not great) or nefariously trying to trick you into working on the cheap (even worse).

Don’t waste your time unless the client is willing to pay your full/normal rate.

3. Client asks you to “just send a sketch” or “share your strategy” for free/cheap

Don’t give away the goods. Most seasoned designers know that the hardest part of the project is coming up with a strategy or brainstorming with early sketches/rough concepts. Polishing is the easy part.

I don’t hold it against prospective clients when they ask me to share free/cheap sketches or strategize in great detail PRIOR to the engagement. I’m always happy to provide a brief overview and point them to my portfolio for examples of my work. But my knowledge and expertise is just as important, if not more important, than my ability to click the right buttons on the computer.

I’ve met WAY too many clients who have taken my ideas or sketches and farmed them out to a cheaper designer to finish the project.

Tell your prospective client that you’ll be happy to walk them through the details once the offer has been sent or you’re under contract. If they push back, it wasn’t meant to be.

2. A client asks for source files before you’ve been paid

This one mostly applies to flat-rate projects. I NEVER send editable source files to a client if I haven’t received some sort of payment, or unless I trust that client implicitly.

Luckily this one is mostly benign. Whenever a client asks, I kindly explain that payment needs to take place before I hand over my originals, and usually they oblige.

However, on the rare occasion the client pushes back, consider that a MAJOR red flag.

1. The bait and switch

This is an instant deal-breaker for me.

You’ve probably experienced this one before.

You see a job listing for a 10-page slide deck on your job feed for $1000. You reach out to the prospective client and they say “Well, maybe we can just do it for $200 instead, and by the way, it’s actually a 20-pager.” Or “Well, THAT slide deck project isn’t ready yet, but I do have this brochure I need today. Could you do that one for a quick $50 instead?”

I’ve seen this little strategy implemented one too many times. The client thinks they can throw that tasty lookin’ bait into the water, and before you know it, they’ve got you where they want you – hook, line and sinker.

Now, hopefully, the client has revealed this deception to you BEFORE you accepted the offer, giving you enough time to run for the hills. But even if it happens AFTER acceptance, you should still, in my opinion, consider politely explaining your concerns, suggest they find a different designer and back out of the contract.

If this happens to you on Upwork, proactively reach out to customer service and explain what happened, just to make them aware of the situation. And don’t worry about getting a bad review. If no money changed hands, the review won’t be displayed on your public profile.

Be warned, it MAY negatively impact your Job Success Score (JSS). That’s the harsh reality of this sort of scam. You might not be able to escape completely unscathed, but you can minimize the damage. In my opinion, taking a small hit on the JSS is way better than spending weeks going back and forth with an obviously deceptive client.

What are your “red flags” when it comes to potentially problematic clients? Let me know in the comments. Also, don’t forget to connect with me on social using the links below.

4 thoughts on “Client red flags: 8 types of clients to avoid on Upwork, in freelancing”

Connect with me on social

Freelancers: Follow me on social for tips on Upwork, freelancing, blogging and small business.